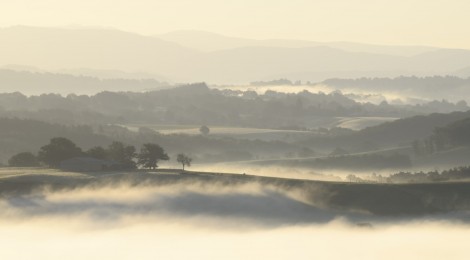 Imagine: you are an average middle-aged relatively healthy person.
One day you start sweating. When you look at yourself in the mirror you see that your pupils have shrunk to pinpricks. You have noticed some constipation and the impotence is new to you as well (if you are a man, that is. If you are a woman, you have probably suddenly entered menopause). Your body is in constant overdrive: your blood pressure and pulse are through the roof. You can no longer sleep, not for a nap, nor for a proper night-long deep sleep to rest. Not just to rest because it is nice, but because it is crucial to your bodily functions.
The exhaustion drives you crazy, you have entered into a downward spiral. While your bodily functions deteriorate in a quick tempo, you are aware what is happening to you, as you have seen it happen to family members…. and then you die.

FFI is a prion disease. Stanley Prusiner received the Nobel Prize in 1997 for introducing prions as a new biological principle of infection. Prions are proteins responsible for diseases like Creutzfeldt-Jakob, scrapie in sheep and bovine spongiform encephalopathy.
Prion diseases can either be the result of a mutation, like FFI, or occur by chance or as a result of human intervention like intensive breeding.

This book tells the story of the discovery of the mechanisms behind this type of disease, interlaced with the tragedy of an Italian family that carries a mutation that causes FFI. Over 30 family members have died from FFI in the past century and more will follow. Unlike many other lethal genetic diseases, FFI generally strikes after the childbearing years of the sufferer, thus the disease does not disappear.

Humans are not just victims, we are unfortunately responsible for some forms of prion disease. Selectively breeding sheep with their own offspring has morphed sheep from their original skinny, heavy-boned forms into the more meat-bearing version that we have today. This satisfied the newly developed appetite for mutton of the working class in Britain in the second half of the eighteenth century, and it satisfied the wallets of the breeders.
However it also caused a disease within these animals: sheep became restless and seemed to suffer from a terrible itch, would stumble and fall down dead within a few months. This fast spreading disease became known as scrapie. Scrapie is only one of several forms of prion disease that both veterinary and human medicine  have faced.

The book also touches on the relatively recent outbreak of mad cow disease in Britain. Furthermore, it explores whether the Australian native tribe The Fore were cannibals or not, and how this related to the disease kuru.
Kuru was remarkably similar to some other diseases that would later be identified as prion diseases. Sponginess and holes in the nervous tissue were recurrent findings upon examination of the brains of diseased people and animals.

This book carefully describes the typically long winding-road that leads to the discovery of a disease mechanism, let alone a cure. Most of the investigations took place before the common use of fancy microscopes and shiny and fast machines that detect next-to-nothing quantities of molecules or microorganisms.
The steps in this scientific process were small. Small, but impressive, given the circumstances.

The characters and perseverance of the scientists, some of them rather eccentric, are vividly portrayed. Moreover, the book illustrates the crucial role played by individuals who drew links between observations made in different times and places, whom connected the dots, in times when information was not one mouse click away.

The book is written in admiration of human achievement; the persistent investigative work, which has led us to become the dominant animal on the planet. At the same time, the story of prion diseases teaches us that human ambition, through breeding strategies, is what caused the infectious form of prion disease.

At times I found the narratives a bit lengthy and with few highlights. However I then quickly realised that is merely a realistic account of the scientific process. The book is mostly a comprehensive and readable report of the impressive and persistent efforts of bright scientists to understand the mysterious biological mechanism that caused such devastating diseases.

This article was written for BitesizeBio.com, an online magazine for cell and molecular biologists.