Browse: Home   /   spoedcursus   /   Molecular Cooking: How to Apply Science in the Kitchen 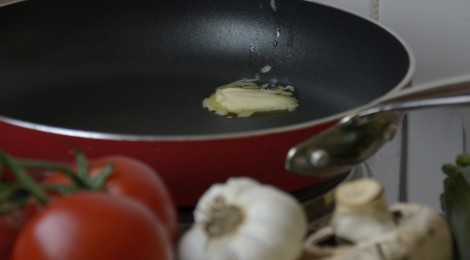 Molecular Cooking: How to Apply Science in the Kitchen

Rumour has it that many people who work in a lab enjoy cooking. And, when asked by a non-biologist family member how they spend their days in the laboratory, molecular biologists might answer that doing experiments is similar to cooking. Apart from the organisational parallels that can be drawn between following a protocol and a recipe, did you realise how much the two activities can have in common?

When you leave the lab, ready to have a relaxing evening, you might actually proceed to do very similar things in your kitchen. If you thought that denaturing proteins, proteolysis and L-glutamate are phenomena that should stay in the lab, read on!

Denaturing proteins are the secret of the famous, labour-intensive recipes of Auguste Escoffier, who is said to lay the basis for French cuisine. He realised that cooking is alchemy, with pleasure as your guide. He invented veal stock; the basis of most of his recipes. After over 12 hours of simmering bones, carrots, onion and herbs, he was ready to start cooking. He wondered what made it taste so interesting if there was very little sugar, salt, acid, and bitter in this stock, the known 4 tastes at the time. The answer is denatured proteins!

In the process of proteolysis, L-glutamate is released. In 1907, the Japanese chemist Kikunae Ikeda had discovered that glutamic acid was ‘the unknown taste’: common to asparagus, tomato, cheese and meat, but not one of the four known tastes. Ikeda called this fifth taste ‘umami’, which is ‘deliciousness’ in Japanese.

When cooked properly, glutamate, which is normally tasteless, is converted to its free form, which can be tasted. This also explains what happens with prosciutto or cheese as it ages. Similarly, umami is the secret of Escoffier’s famous veal stock. Over 90 years after Ikeda discovered glutamate, two tongue receptors (baptised ‘umami’ receptors) were identified, which specifically sense glutamate and L-amino acids.

Optimise your temperature (or choose your butcher well)

Now what happens in your pan when you feel like eating a big piece of meat? Meat is composed of long muscle fibres, collagen, connective tissue and fat. These components respond differently to temperature, so, just like with lab experiments, the temperature you choose determines the outcome.

Actin and myosin proteins within the meat fibres can denature and form networks when heated (around 60°C), resulting in tender meat. Cooking meat at low temperature (40-50°C) contributes to the taste, as enzymes then break down the muscle proteins, giving you tender, tasty meat. If the temperature gets too high though (80°C), the result will be a tough piece of meat. But if you want a brown crust on your meat, you’ll need to reach 120-140°C. Connective tissue and collagen can turn into gelatine when heated at a high temperature (>80°C) for a long time, which makes for a juicy chunk of meat. But before that, at around 60°C, collagen may shrink, leaving you with a wrung out sponge.

This seems like an unsolvable paradox, if it wasn’t for your local butcher. He helps by selling you specifically selected meat: with a lot of connective tissue for a stew (perfect for long simmering) or a steak with very little connective tissue (so shrinking collagen won’t interfere with cooking it at low temperature). See it as a commercial kit optimised for your special application!

To lay an egg

You’ll remember from your chemistry classes that molecules move faster when heated. This causes solids to become liquid and liquids to evaporate. Not eggs: eggs solidify when heated. Egg white consists of 90% water and 10% proteins, while the yolk is made up of about 50% water, 17% protein and 32% lipids. At room temperature, the proteins are folded, and can freely move along each other, so the egg is liquid. Heating denatures the proteins, which will make them form networks, and the egg white and yolk will solidify. As you might have observed over Sunday breakfast, yolk (solid at 70°C) fully coagulates before egg white (solid at 80°), although both processes start at around 62/63°C.

We typically ‘boil’ eggs for a few minutes in water of 100°C, but if you want snotty egg white (I personally couldn’t think of a reason why!) and almost solidified yolk, putting your eggs in an oven at 65°C for a few hours is the way to go. The pH also determines how quickly the egg solidifies: acidity promotes coagulation. Thus, in theory, you could ‘boil’ your egg by playing with the pH.

These are just some examples of the many enzymatic reactions happening in your kitchen, responsible for the right structure and, not irrelevant, taste. Most famous is the Maillard reaction: a chemical reaction between an amino acid and a sugar molecule, taking care of most of the taste development in your pan. A Maillard reaction is exactly what is happening in a good stock. Hours of simmering allow proteins to break down into amino acids, to then react with sugars from the meat or added vegetables. Because this reaction is slow, preparing a good stock takes time. In case you are in a hurry, there are two roads that lead to Rome: slow at a low temperature as described, or quick and at a high temperature. But you will smell or taste a different Rome: depending on the temperature, different reactions have different speeds, so temperature determines the balance of the chemical reactions, and thus the taste.

Maillard reactions are also responsible for the dark colour of dark beer, in which wheat proteins react with the added sugars after a few weeks. A similar thing happens when making balsamico vinegar from wine, although in this case, the process may take years.

Many more parallels can be drawn between the lab and the kitchen. Molecular cooking has become a trend, and some people take it as far as to throw food into liquid nitrogen. Having learnt the above and thinking about how quickly anything that falls into liquid nitrogen freezes, I wonder how much time that leaves for taste to develop?

For more fun parallels between lab work and cooking, check out this previous article.

Do you take lab knowledge into account while cooking?

← About time
The Power of Simple Thought: a Book Review of “Proust Was a Neuroscientist”, by Jonah Lehrer →