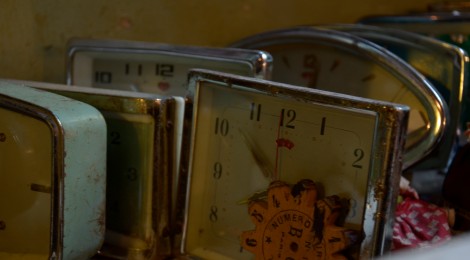 Telling time on your biological clock

It is not uncommon for scientists to work irregular hours: starting very early in the morning to have all lab equipment for yourself, and/or continuing until late at night.

Next to increased productivity (at least that’s what we think … read on!), what are the other consequences of screwing up your biological clock?

All members of the animal kingdom have an internal neurological clock, to take advantage of the light/dark cycle and to adjust the organism’s physiology accordingly. The vertebrate biological clock is located in the suprachiasmatic nucleus (SCN) of the hypothalamus. It is responsible for regular fluctuations of virtually all bodily functions, referred to as the circadian rhythm. Many genes exhibit a fluctuating expression level, based on the light/dark cycle.

Organisms not only stay in sync with the environment on a day/night basis; seasons are kept track of, too! Thus, the SCN functions as a calendar, as well. But I don’t expect you to lose track of the seasons due to a late night at work, so that is not the focus of this article.

Probably the most well known substance that follows a specific day/night rhythm is melatonin. Oscillating melatonin levels appear to be very important in signalling timing information to other organs. Light is the primary cue: the information that reaches the eye is transmitted to the SCN. This external light cue resets our biological clock a tiny bit on a daily basis, as its natural rhythm is slightly different from 24 hours (circa dia – got it?). That in itself is no problem. But humans generally reset their clocks more often than that: we all tend to contaminate the normal period of darkness with artificial light. Thus all (or most) of our circadian rhythms are permanently disturbed. This has consequences for melatonin levels: they are too low.

Melatonin is mostly known for its sleep-inducing effect (a faithful travel companion of many on long flights), although its actual effects can vary depending on the phase in the circadian rhythm. Moreover, melatonin regulates body temperature, mood, immune function, antioxidant mechanisms, and cardiovascular function. Therefore, it is not very surprising that disruption of the melatonin cycle through sleep disruption will have consequences for our health. Indeed, many effects of disturbed sleep have been described, including emotional responses such as mood fluctuation, increased irritability, risk-taking behaviour and stimulant or alcohol abuse, up to depression and psychosis. You may have noticed that a lack of sleep doesn’t help your concentration and memory, and your multi-tasking and decision-making abilities, as well as your performance and creativity, will suffer from sleep deprivation. Somatic responses include drowsiness, sensations of pain and cold, increased cancer risk, increased risk of developing diabetes, decreased immunity, and altered stress axis regulation.

The good side of the dark side

Now, don’t expect to accumulate all of these symptoms due to one short night’s sleep after working late (whether you were writing a grant proposal or networking in the bar). Many of these effects have been found in shift workers, who have a consistently disturbed day/night-cycle. But, some might also apply to individuals who have irregular sleep/wake cycles for other reasons, and possibly even for people with less consistently irregular sleep/wake cycles. It turns out that even a brief exposure to light during the night provides the SCN with inappropriate information, which is subsequently passed on to other cells, potentially resulting in certain functions being induced at the wrong moment.

So don’t let your children sleep with a night light, and try to find the way to the bathroom guided by touch, rather than light!

Although many of the mechanisms underlying the metabolic changes as a result of a disturbed sleep and circadian rhythm still remain unclear, it seems wise to respect our innate biological clock. As much as possible, that is, knowing that our 21st century lifestyle is not entirely compatible with our ancient genome.

Sleep to be slim!

Interestingly, on a population level, there is a strong correlation between sleep times and the prevalence of obesity. Studies performed in the USA indicated that in 1960 the usual sleep duration was between 8 and 8.9 hours. In 1995, a similar study reported 7 hours as a common night, and in 2005 American adults claimed to sleep only 6 hours. In the same period, body fatness and obesity have risen strongly. You might think that this is a loose correlation mistaken for a causal link, but there is more to this connection than creative statistics. Energy balance is altered by shorter sleeping times not only because you have more time to eat, but also because you’re more active, and thus, more hungry. Hormonal effects can influence feelings of hunger and satiety. Melatonin is involved here, too: it limits body weight gain independent of energy intake.

For some, its effect on limiting weight gain is already enough reason to not mess with melatonin levels, by maintaining a good sleep hygiene. For others, while many questions remain on the long-term effects of sleep deprivation, it seems clear that a regular, uninterrupted, dark night is important for good health (you don’t need to sleep in order for melatonin to be produced, but darkness is essential). In the short term, your late night work session might result in a net decrease in productivity, if you’re going to suffer from the performance effects described here. And don’t forget about your colleagues, who will have to put up with your increased irritability and mood changes!

← The story behind your cell culture
Could crowd-funding work In science? →